Skip to content
Share on Facebook Share
0
Share on TwitterTweet
Share on Pinterest Share
0
Share on Digg Share
Send email Mail
0
Total Shares
Millions of people around the world believe in live in reincarnation. The idea that we have lived before and will live again after we die is thousands of years old, but is there really a connection between birthmarks and past lives?
Reincarnation is a religious or philosophical concept that the soul or spirit, after biological death, begins a new life in a new body that may be human, animal or spiritual depending on the moral quality of the previous life’s actions.
Dr. Ian Pretyman Stevenson (1918 – 2007), a Canadian American psychiatrist became known internationally for his research into reincarnation. He believed that not only emotions, memories but also physical injuries in the form of birthmarks, can be transferred from one life to another. His theories were based on the studies of 210 cases of children. In time he became convinced that birthmarks hold some significance to a past life.
In his science paper Birthmarks and Birth Defects Corresponding to Wounds on Deceased Persons, Dr. Stevenson wrote that “almost nothing is known about why pigmented birthmarks (moles or nevi) occur in particular locations of the skin. The causes of most birth defects are also unknown. 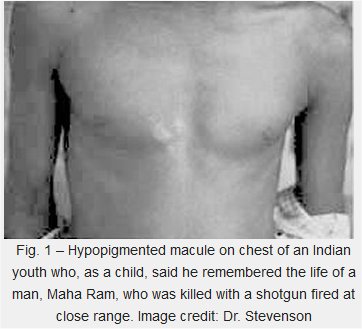 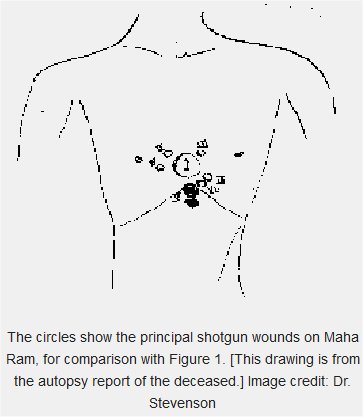 The birthmark or birth defect of the child was said to correspond to a wound (usually fatal) or other mark on the deceased person whose life the child said it remembered.
Children who claim to remember previous lives have been found in every part of the world where they have been looked for, but they are found most easily in the countries of South Asia. Typically, such a child begins to speak about a previous life almost as soon as it can speak, usually between the ages of two and three; and typically it stops doing so between the ages of five and seven.”
There are several examples birthmark cases studies by Dr. Stevenson, Among them we find a boy born in India without fingers on his right hand. He remembered another life in which he was a boy who had his fingers amputated after sticking them in a fodder chopping machine.
Another example is a boy in Turkey with a malformed right ear. This boy remembered having been shot and killed at close range on that side of his head.
A boy named Maha Ram in India could remember being killed in a previous life with a shotgun fired at close range. He remembered enough details of his past life for Stevenson to find the autopsy report of the man supposedly reincarnated as Ram. The birthmarks on Ram’s chest corresponded to the bullet wounds.
Another Burmese child said that she remembered the life of her deceased aunt, who had died during surgery for congenital heart disease. This child had a long, vertical linear hypopigmented birthmark close to the midline of her lower chest and upper abdomen; this birthmark corresponded to the surgical incision for the repair of the aunt’s heart.
Source: In5d

Scientists Just Found Half of the Missing Matter in Our Universe
7 Chakras & 7 Links to Your Subconscious
Good and Evil as Defined by Graham Hancock
QUIZ: What is Your Animal Totem?
Pythagoras, The Golden Ratio & The Tuning Of The Human Frequency
Matching Our Heartbeat to the Beat of the Universe