What is the pineal gland for?

While undoubtedly important, the pineal gland does not possess mystical or supernatural properties, no matter how much some people would like to believe it. Even some great, renowned thinkers have fallen foul of magical thinking here, such as the scientist and philosopher Descartes, who described the pineal gland as “the seat of the soul”.

Indeed, it is just but one gland among many that comprise the endocrine system in vertebrate animal species, whose function is heavily involved in the regulation of circadian (daily) rhythm and the production of hormones – the most important of which being melatonin, the “sleep hormone”. However, there are a few things that mark out the pineal gland as unique and interesting. Let’s take a brief look at what they are.

Why is the pineal gland so unusual? 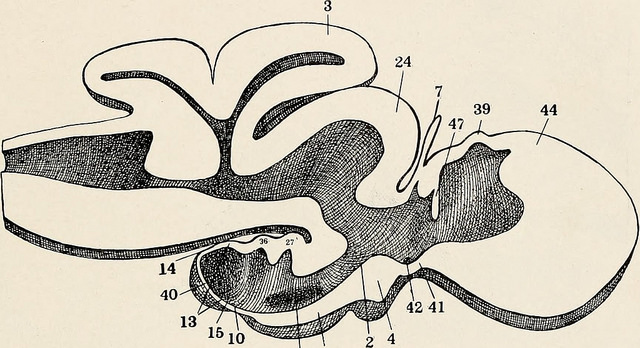 The pineal gland is thought of as the “third eye”, and does in fact possess some of the qualities of a simple organ of sight

The idea of the pineal gland being a primordial “third eye” has some basis in fact. The gland is made up of cells known as pinealocytes, which in some non-mammal vertebrate species actually directly respond to light. This ability makes them very similar to the cells of the retina, the part of the eye that receives light from the lens opening.

In some fossil species, scientists have even found holes just like eye sockets in the centre-rear part of the skull, which allowed the pineal gland to receive light directly, just like an eye. In fact, several modern species of reptile and fish still retain a functional “third eye”, such as the New Zealand reptile species the tuatara, whose extra eye actually has a lens, a retina and a cornea of its own! It is thought that these functional third eyes are involved in maintaining daily and seasonal cycles of hormone production.

In mammals, the pinealocytes aren’t known to directly receive light, and there is no evidence of functional “third eyes” existing. However, the pinealocytes of mammals are known to be directly linked to the retina itself, which sends signals in response to changes in light levels in order to regulate circadian rhythms. So in some respects, if one stretches the definition of what constitutes an eye to the limit, one could still say that the pineal gland functions somewhat like a rudimentary third eye even in mammals.

One interesting aspect of the pineal gland that certainly does apply to mammals, including humans, in this: unlike much of the brain, the pineal gland is not separated from the rest of the body by the blood-brain barrier. It receives abundant blood flow directly from the posterior cerebral artery, which may have something to do with its receptiveness to psychoactive substances.

Why do psychoactive substances often affect the pineal gland?

As well as being in a perfect position to receive all kinds of substances not filtered by the blood-brain barrier, the pineal gland is also at the heart of a “cascade” of reactions which fire off when norepinephrine, a well-known neurotransmitter responsible for regulating sleep and wakefulness, binds to its receptors in the pineal gland.

When norepinephrine binds to the receptors (known as adrenergic receptors), the chain of hormonal and enzymatic interactions that results is responsible for signalling when it is time to sleep, and when it is time for the individual to wake and become active. Thus, this cascade is deeply involved in setting up one’s “mood”, and how one perceives and responds to the challenges of the coming day, as well as ensuring that sleep of sufficient quality and duration is regularly achieved.

Clearly, the pineal gland is essential to maintaining a healthy, positive mind state, and is deeply concerned with emotional states in general. When humans consume psychiatric drugs, it affects this complex cascade of activity in the pineal gland, in conjunction with various other parts of the brain, to give a subjectively altered state of perception.

One example of the importance of the pineal gland in terms of psychiatric good-health is its relationship with the “Winter Blues” illness, seasonally affective disorder (often abbreviated to SAD). The fact that bright light is a common treatment for SAD suggests that the pineal gland and its associated light-sensitive hormone, melatonin, is involved. Furthermore, the fact that low light levels can cause such a dramatic set of psychological symptoms indicate that the pineal gland is fundamentally linked with psychiatric good health in general, and that its dysfunction may be behind other mental disorders too.

How does cannabis itself work in the pineal gland?

Research on rats has shown that the pineal gland contains a functional endocannabinoid system, in that cannabinoid receptors type 1 and 2, and the endogenous ligands that bind to them, anandamide and 2-AG, are all present.

The study showed that the activity of the CB?-receptors varied according to a daily cycle, with lowest activity levels occurring at the end of the daylight period. It also showed that levels of an enzyme responsible for synthesizing new endocannabinoid molecules, NAPE-PLD, was reduced during the middle of the dark period.

Furthermore, the study showed that presence of THC reduced the activity of an enzyme known as AANAT, and in doing so reduces the synthesis of melatonin itself. An earlier study on rats also showed that THC reduced the activity of AANAT, and suggested that the mechanism that occurred was as follows: the neurotransmitter norepinephrine starts a cascade of reactions, the end result of which is the production of melatonin. THC disrupts this norepinephrine cascade and thereby reduces the production of melatonin.

It is likely that THC’s endogenous analogue anandamide performs the same action of reducing the norepinephrine-induced release of melatonin, and is therefore fundamentally involved in pineal gland function. It seems that low levels of anandamide or THC are therefore needed in order for melatonin production to increase. As melatonin levels increase, as they should normally do at the end of the daylight period, feelings of sleepiness should occur.

But smoking cannabis makes me sleepy! Why?

If low levels of anandamide are required for melatonin production to increase, and levels of cannabinoid receptor activity are lowest at the end of the daylight period, that seems to imply that using cannabis would cause melatonin to be reduced, which should mean that sleepiness is also reduced. But many people report feeling sleepy after using cannabis. Why is this?

It may simply be that the mechanisms relating to cannabinoids and pineal gland hormones work differently in rats than in humans. Indeed, while the studies on rats clearly showed that THC reduced melatonin levels, there is evidence to suggest that the reverse is true in humans. An 1986 study showed that in eight out of nine healthy male volunteers, THC caused melatonin levels to dramatically increase, peaking around 120 minutes after administration. Interestingly, however, one subject showed a decline in melatonin in response to THC, just as was seen in rats.

Whether or not cannabis makes one feel sleepy may depend on dose, tolerance and a whole range of other factors, and may even depend on the time of day that the user consumes cannabis in relation to typical circadian rhythms. Furthermore, there may also be a genetic element controlling individual response to cannabinoids, as genetic differences in expression of cannabinoid receptors have been noted in multiple studies.

It is also now thought that many of the subjective effects of cannabis are not derived from THC per se, but rather from THC in combination with various other cannabinoids and terpenes. For example, myrcene is now thought to affect the “high” of pure THC, giving an overall more “couch-lock” effect to the user. Furthermore, pure THC has been shown on a number of occasions to have either a sedative or stimulant effect, depending on dose.

But how does the pineal gland actually affect the process of getting “high”?

The pineal gland is heavily involved with the regulation of sleep and circadian rhythms in humans (Fl??d)

This is is not entirely clear, and in any case, we know that multiple different regions of the brain are involved in the subjective experience of being high. The pineal gland is just one tiny link in an extremely long and complicated chain, which stretches between some of the most basic and fundamental parts of the brain (and the pineal gland can definitely be classed as basic and fundamental, as almost every living vertebrate possesses one) and some of the most advanced, such as the neocortex, which only exists in mammals.

However, the pineal gland has repeatedly been associated with the biosynthesis of important natural compounds related to sleeping, dreaming, and dream imagery. The presence of these compounds in the pineal gland is one of the most important reasons that so many view it as the “seat of the soul”, or a key to “spiritual enlightenment”. Without a doubt, the most famous of these compounds is N,N-Dimethyltryptamine, more commonly known as DMT.

It’s actually somewhat controversial as to whether or not the pineal gland is responsible for synthesizing DMT in humans, but there is significant evidence to suggest that it is the case. DMT and related compounds tryptamine and bufotenin have been found in human urine, and DMT itself has been shown to be synthesized in the pineal gland of the rat brain. A closely related compound, 5-MeO-DMT has been found to be synthesized in the human pineal gland, but thus far, it has not been proven that DMT itself is too.

In any case, it certainly appears that the pineal gland is very much involved in the production and/or processing of substances that are well-known to be involved in helping to create “dream states” when we are asleep. Thus, there are many theories that the subjective experience of getting “high” from cannabis, hallucinogens and other psychoactive drugs also involves this subjective creation of a “dream-like” or otherwise altered reality.

Read also: 4 Things You Must Know About Your ‘Third Eye’ – One Of The BIGGEST Secret Kept From Humanity

The pineal gland is part of a complex and fascinating system

DMT is an ingredient in ayahuasca, a powerful hallucinogen whose users often produce art like this (Howard G Charing)

While we are far from having a complete understanding of the complex network of chemical compounds that interact in the brain, we are beginning to build a simple map of how all these interrelated processes fit together. It is increasingly clear that the endocannabinoid system is a fundamentally important messaging system that helps to link together various parts of the brain, many of which work together to give us the subjective experience of being “high”.

The pineal gland itself is crucial to this process, and has undeniable importance as a source of consciousness-altering compounds. It works with the endocannabinoid system and various other regulatory systems to control our subjective daily experience of mood, wakefulness and sleepiness, and when we introduce external psychoactive compounds, this process can be altered in fundamental ways, some of which can be greatly enjoyable to the individual!