It was only after the bones were declared very old and not the product of a mass murder that the 167 bodies found in a pond in Windover, Florida began to stir up excitement in the archeological world. Researchers from Florida State University came to the site, thinking some more Native American bones had been unearthed in the swamplands. They were guessing the bones were 500-600 years old. But then the bones were radiocarbon dated. It turns out the corpses ranged from 6,990 to 8,120 years old. It was then that the academic community became incredibly excited. The Windover Bog has proven to be one of the most important archeological finds in the United States.

In 1982, Steve Vanderjagt, the man who made the find, was using a backhoe to demuck the pond for the development of a new subdivision located about halfway between Disney World and Cape Canaveral. Vanderjagt was confused by the large number of rocks in the pond as that area of Florida was not known to be particularly rocky. Getting out of his backhoe, Vanderjagt went to investigate and almost immediately realized that he had unearthed a huge pile of bones. He called the authorities right away. It was only thanks to his natural curiosity that the site was preserved. After the medical examiners declared them ancient, the specialists from Florida State University were summoned (another brilliant move by Vanderjagt- too often sites are ruined because experts are not called). Deeply intrigued, EKS Corporation, the developers of the site, financed the radiocarbon dating. Once the striking dates were revealed, the State of Florida providing a grant for the excavation. 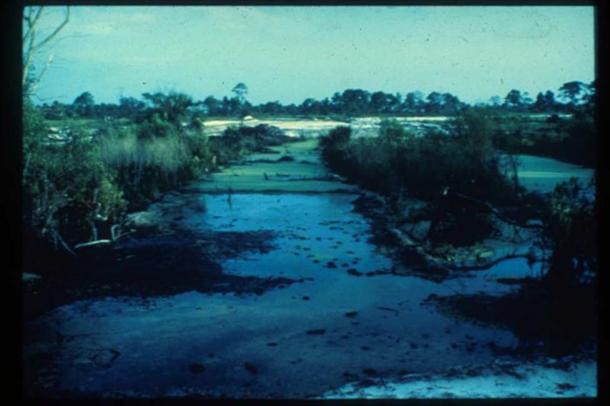 The pond that Steve stumbled upon. ( myfloridahistory.org)

Unlike the human remains found in European bogs, the Florida bodies are only skeletons – no flesh remains on the bones. But this does not negate their significance. Nearly half of the skulls contained brain matter. The majority of the skeletons were found lying on their left sides with their heads pointing westward, perhaps toward the setting sun, and their faces pointing to the north. Most had their legs tucked up, as in the fetal position, however three were lying straight. Interestingly, each corpse had a stake thrust through the loose fabric that enshrouded them, presumably to prevent them from floating to the surface of the water as decomposition filled them with air. This practical step was what ultimately protected the bodies from scavengers (animals and grave robbers) and kept them in their intended positions.

Edgar Cayce~Understanding How Colors Affect The Human Aura
Scientists Use EEG Machine to Create Digital Images From Brain Activity
How Mindfulness Works
Are We Living in a Hologram?
Patients Are Dumping Benzodiazepines in Favor of Cannabis to Treat Anxiety
The Genesis Project Plans to Use Robots to Seed the Galaxy With Life