What is our memory and can science help us explain how it works? What does it have to do with esoteric term “akashic records” and is there a way to get rid of negative subconsciously controlling stress? According to Oxford online dictionary, our memory is the faculty by which the mind stores and remembers information or simply something that is remembered from the past (including our thinking patterns and experiences). There is an esoteric term akashic records that seems to be closely related to what we know as memory. Akashic Records describe collection of thoughts, events, and emotions that exist on the higher levels of consciousness. Apparently, there is no scientific evidence for existence of the Akashic records. But how can matter-based old scientific paradigm can give proof or disproof to existence of something that lies on the higher levels of consciousness? If we use current scientific paradigm then there is no scientific evidence for existence of our memory either.

Akashic Records describe collection of thoughts, events, and emotions that exist on the higher levels of consciousness.

Matter-based worldview concentrates mainly on the physical or material form which makes it very limited in regards to energy-informational world we are living in. There is much more to our universe than we know and perceive as reality. Until something is explained by science many people consider it magic, extrasensory ability or some kind of supernatural phenomena.

“There are more things in heaven and earth, Horatio
Than are dreamt of in your philosophy.”
– Hamlet, Shakespeare.

There is a new scientific field Infosomatics (based on the research of the International Institute of Social Ecology) that offers visual model that can help explain what akashic records or human body of memory (aka mental body) is. If we accept the existence of the human bodies on the higher levels of consciousness: the human aura, astral, mental, causal as well as other bodies of the higher consciousness, then a certain model can help us explain how they work. The visual model can even be used to improve the quality of our lives after it is tested in practice and brings positive results.

As many of you know, the human aura is an egg shaped energy shell of a human. It has its energy centers or seven chakras (see “Physics of Seven Chakras and How to Balance all 7 Chakras Correctly”) that are responsible for receiving and transmitting energy as well as information that are vital for proper functioning of the human organs and body system. The current state of the human aura can be analyzed and diagnosedby people who have the ability to see it (which is a skill that can be learned) as well as by certain devices.

In order to analyze the state of our chakra energy in the past we might need to turn to principles of relativity introduced by Albert Einstein. Everything is relative and for an outside non-accelerating observer the human physical body, as any material object, is a set of energy-informational particles that is moving in space and timewith a terminal speed “C”. An object that is moving in space with a speed “C“ will lose its volume in the direction of its manifestational axis (an egg shaped sphere will turn into a disk). By adding the concept of time and movement in space to the model of the human aura we get so called body of memory, mental body or personal akashic record. (see the video on the bottom of the page or the picture below 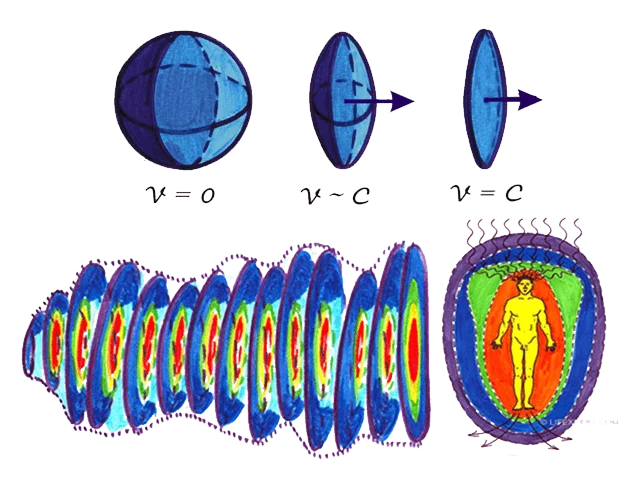 The model above gives a chance to visualize human life as a constantly moving tube that is created in space and time (on the higher levels of consciousness) with the information from our energy shell or the human aura. It holds the memories about all of our emotions, experiences and events starting from the point we receive the energy of life together with our potential on the date of birth (see “How Knowing Your Cosmic Address Can Help to Realize Your Potential). The bumps and holes on the surface of the body of memory symbolize the stress in the energy flow that we have experienced in the past. Using certain visualization techniques it is possible to go back in time and pinpoint the subconsciously controlling stress on our personal “akashic record”. If someone has accumulated a lot of subconsciously controlling stresses throughout their life they might feel lack of their own energy flow which usually leads to sickness and problems with their physical body. 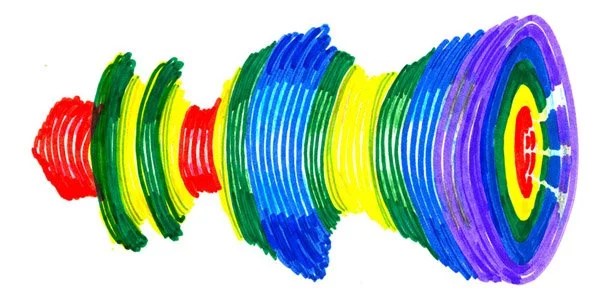 After the stress is revealed it can be discharged with Infosomatics visualization techniques (e.g. “Powerful Visualization Meditation Technique – DNA Tree of Energy Flow“) and it will no longer have a negative effect on the current state of person’s energy.  When the stress is discharged and the blockage on the mental body is removed, the person gets back all the energy that he or she lost in the past. The similar concept is behind NLP sessions and other modalities when a patient is asked to remember an event back in time when they were a kid and a certain stress situation had happened. A patient is then asked to comfort their “child self” and tell themselves in the past that everything is going to turn out just fine. When we lack energy today it does not necessary indicate that we need to find an outside source of energy (unless we want to turn into an energy vampire, see “5 Signs of an Energy Vampire Who Kills…”). It means that we need to get rid of the negative influence from the stress that we have in our past memories.

Our mind including our subconscious mind does not really want to change and Nature often forces us to move forward and evolve using what we perceive as stressful situations. With time however those stresses can accumulate and have a destructive effect on the state of the energy flow in the human aura. Infosomatic model of the mental body or personal akashic records allows an operator to measure it using a pondermotor writing technique. Information that is received after analysis of a person’s akashic record can help to get rid of the energy blockages that are holding you back from realizing your full potential. Nature did intend for us to be happy, we just need to see what is in the way of our dreams and learn how to get rid of it.